Long Distance Relationship Statistics That Will Suprise You 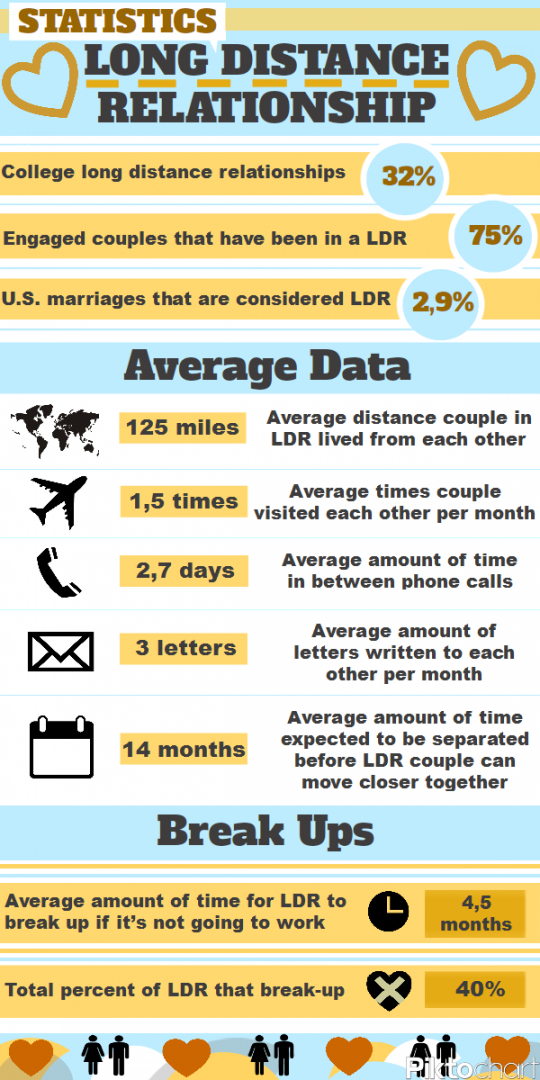 The two categories most long-distance relationships fall into are either couples that were separated by their circumstance or couples who started their relationship online. Those circumstances were people that were working outside of their home countries, active in the military and stationed far from home, and people in college. Even more, people were separated because the world was locked down in quarantine. They haven’t been allowed to travel like normal. Couples that weren’t long-distance before are in that type of relationship now because they’ve been in quarantine across the U.S. They were also without the one they loved the most. The stress caused by not being able to be when you’re physically not able to be with your partner because of something beyond your control is unimaginable. 70% of the main reasons a long-distance relationship fails is because half or both sides didn’t prepare for the change the distance created. There is so much unwanted tension that this situation has put on relationships. I can relate to their stress, anxiety, and pain.

The infographic above explains the averages of how people in long-distance relationships communicate and how often they do so per month, the average distance they were from one another, and some other facts that I mentioned earlier. All of these are factors in how long the relationship lasts.

What studies have found is that 27% of couples in long-distance relationships never lived close to each other (New York Post), which was the case in my relationship. I was living in Washington State, which is where we met and grew up. He was living in Oregon. We were apprehensive but decided to give it a chance because of the connection we had built over the previous two months that we were talking to each other. Little did we know what barriers we were about to face.

The Story of my Long-Distance Relationship

In October of 2019, I decided I needed a change and decided to move to Dallas, Texas. I wasn’t able to relocate there until April 2020, which is when the virus started to spread and after states started to go into quarantine. I didn’t think it would impact my relationship more than it already had. Man, was I wrong.

The first month had several highs and lows. At the time, I was working as an independent contractor in the experimental and promotional marketing industry. I had already expected it to be slow, but the amount of work available became non-existent once the virus started spreading like wildfire. Good news finally came when I landed my dream job as an executive assistant, but my excitement faded two weeks later when my boyfriend told me that he had lost his job at Amazon. I felt horrible for him because they extended his contract, but he thought they gave more notice than letting him know on his last day. More bad news came a week later when I discovered that my dream job was just a scam and they had tried to rob me of what little money I had left. I was so crushed and felt so alone. All I wanted was for my boyfriend to be here to comfort me, but I knew it wasn’t going to happen anytime soon. I started wondering what we were going to do. He was broke, I was broke. Could we get through this? Why did I put myself through this? Were we even on the same page with what we wanted? My head started to spin with confusion and doubt. I already felt pushed to my limit with moving so far away and being trapped in a crowded one-bedroom apartment with my thoughts. I knew something had to change, so I didn’t go into a full downward spiral.

I started focusing on what I could do and started putting energy into starting my own digital marketing business. I wanted to be able to see my boyfriend without having to ask someone for approval and to be able to travel the world (obviously when it was safe). Flexibility was the key to that. Flight costs went back to being expensive and not as cheap as I thought it would be, which was also a driving factor. All of these different components made me more determined to find a way to work on things that I enjoyed, but also helped me get the income I needed to fly back to Oregon. I felt that the ability to connect in person is the best way to keep us connected.

A couple of months later, even more good news came. My boyfriend was hired again as a logistics coordinator but at a different company. It wasn’t exactly what we hoped for (temp to hire position), but it was better than nothing at all. My business started to fall into place faster than I expected. We were also having more open conversations about the concerns I had about our relationship. Technology has increased our ability to communicate more, but also in multiple ways. According to the New York Post, about 88% of people in long-distance relationships stated that technology has allowed them to stay more connected to their partner. I know that if we didn’t have the technology that we do today that our relationship wouldn’t have made it to this point today. Although the conversations were hard to bring up and a little awkward to have, they made a dramatic difference. I felt so much better after having those scary conversations and even better about where we were heading. We were communicating better, he had a job, and I was about to be making money very soon, so things were starting to look up even though the virus had become worse. I finally felt good about my own life and where our relationship was heading.